By focusing investor attention on gross profit, Xiaomi Corp’s (1810 HK) Q3-18 results deftly side-stepped the YoY EBITDA decline of 14.3%. To us it is evident that economies of scale are absent in the business, and with an ever increasing emphasis on extending generous credit to boost sales overseas, Xiaomi is playing with fire. We advise investors to exercise caution. In our view, there is better value elsewhere in Asian equity markets.

Xiaomi Corp (1810 HK) (“Xiaomi” or the “Company”) reported Q3-18 results on November 19, 2018, which appear to have excited some investors, because the stock moved up significantly on November 20, 2018. Nonetheless, since the publication of our bearish thesis covering the Company’s Q2-18 results in Xiaomi Inc. – Honest Pricing Contributes to Declining Margins. We Remain on the Sidelines., those long Xiaomi have been handed coal in their Christmas stockings. The latest financial disclosure from the company does not alleviate any of our concerns with the Company’s business model, albeit raise additional questions regarding the Company’s sales practices and liquidity situation, should a slowdown in Chinese and global smartphone demand fail to revive quickly with the advent of 5G.

Investors are aware that the Company intends to sell devices at low prices to gain market share while hoping that its internet services model will bring higher margin and sticky subscription type revenues. As per the latest disclosures, not only does the company have low-prices, it also has favorable credit terms extending up to 180 days for its distributors, exposing the Company to foreign exchange and other significant risks, that its competitors do not face to a similar extent. Concomitantly, in order to manage its cash requirements, the Company’s trade payable balance has ballooned 54% YoY as shown in Figure 1. 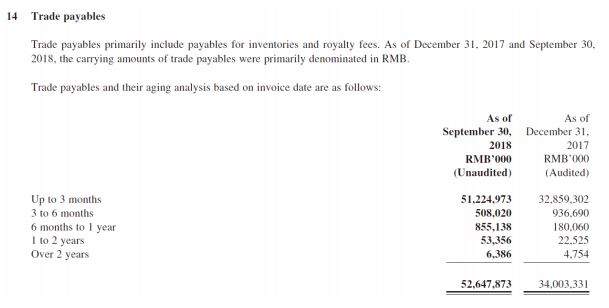 Payable growth is occurring at a time when the smartphone market in China is shrinking. On the conference call, Jun Lei said that the “Chinese smartphone market is declining this year”. Juxtaposing that statement with Xiaomi’s experience in China in Q3-18 suggests that there is more trouble for Apple Inc (AAPL US) and its ilk in 2019, like Xiaomi and its brethren claw their way to greater market share and move higher in the global value chain.

Figure 2 highlights the distribution of Xiaomi’s sales in China and elsewhere. 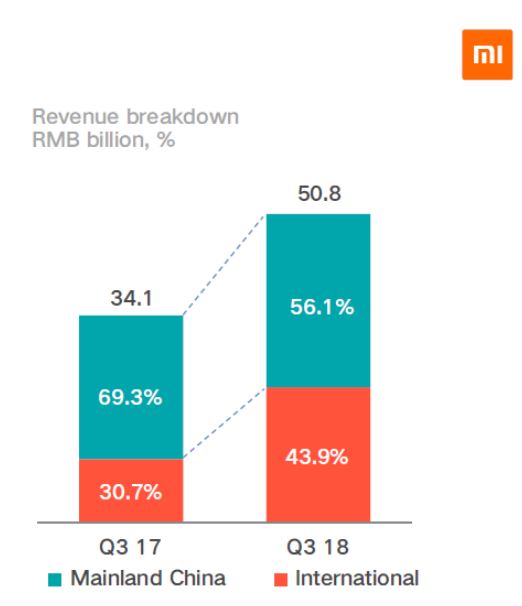 Sales in China grew 21% YoY from 23.6 billion RMB in 2017 to 28.5 billion RMB in 2018. Sales grew on the back of strong ASP performance in China which increased 16% YoY. ANTYA estimates that adjusting for ASP increases, volumes in China grew at a much lower at 4.3% YoY. The story in the rest of the world also appears rosier than it is. Given that the Chinese growth in penetration has come to a crawl, the Company is pushing to gain share globally. It is succeeding with its low-cost strategy in India and in Indonesia, two markets that are massive in size but offer paltry profit pools to exploit. The fact that Apple Inc. has failed to make headway in India with even its mid-tier phones, is a clear indication that the Indian market is not ready or able to pay up for quality. Investors would recall that BlackBerry Ltd (BB CN) used to boast of its hold on the Indonesian market when it had been decimated by Apple elsewhere. That did not end well for BlackBerry.

As highlighted in Figure 3, not only are Xiaomi’s EBITDA margins significantly lower than that if its competitors, economies of scale expected to boost the bottom line are not coming through either. 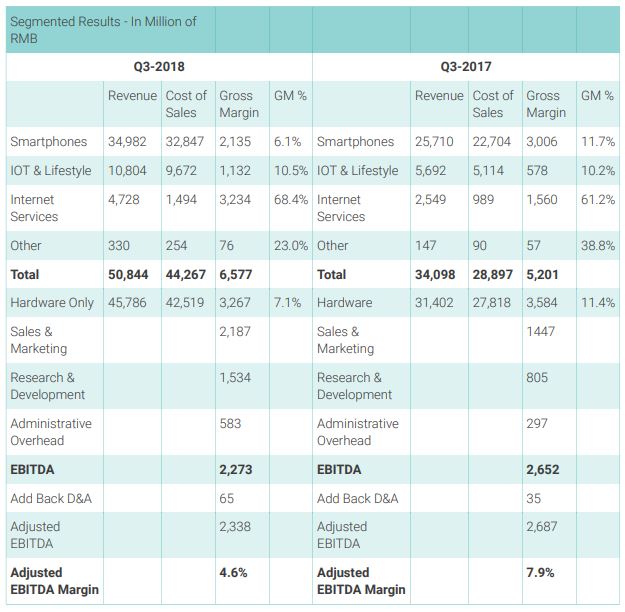 With consolidated EBITDA margins at 4.6% for Q3-18 compared to 7.9% in Q3-17, it should not be a surprise that the Company’s EBITDA declined

14.3% YoY. EBITDA decline would have been worse, if not for the gross profit boost from advertising on the Company’s Mi platform.

In ANTYA’s view, at this juncture, investors would be well served by considering if Xiaomi is investible at the current valuation. Without repeating everything we have said before, we propose that investors compare Sony Corp (6758 JP) and Xiaomi. Both companies compete in similar geographies, with similar products. Without going into too much in detail, if one were to consider Xiaomi’s Internet Services business as being identical to that of Sony’s PlayStation business – we can already see some raising their eyebrows – then it would be easier to look at the difference in valuation and make a decision. Figure 4 highlights for investors the god-like status accorded Xiaomi without the IP or brand strength to back it up, compared to some others in its space.

Figure 4: Xiaomi’s valuation will Correct – Watch Out Below 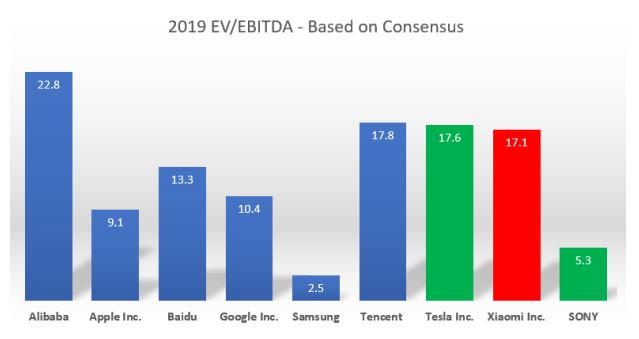 Given the opportunity cost of capital, in ANTYA’s view, Sony is a better bet than the Company, and so is Tesla Motors (TSLA US). Xiaomi is neither a category leader like Tesla Motors nor does it have a mouth-watering valuation like that of Sony.

We maintain our view that Xiaomi will underperform and that it becomes a plausible investment around 8.0x forward EBITDA. Till then it is better to belong to SONY and short Xiaomi.