“We Do Not Bet on Science, But On Management”

That Valeant Pharmaceuticals International Inc.’s (“Valeant” or the “Company”) stock price was bound to implode is evident in the quote from the Company’s 2011 annual report. Needless to say that the entire business of drug-discovery is built on advanced scientific knowledge and is subject to peer-review and stress-testing by scientists and statisticians to validate the robustness of any claims. That reassuring process introduces significant failure risk with equally commensurate economic, moral and societal rewards upon success.

Although no scientific process is perfect, a key element of  scientific drug discovery is that results cannot be created out of thin year i.e. via financial re-engineering or bravado, but only through cure. For instance SOVALDI from Gilead Inc. (“Gilead”) introduced a cure for Hep C, and in the process has enriched its various stakeholders while making lives of millions better worldwide. Gilead bet on science and stands tall among its peers.

Portfolio managers afraid of being left behind the benchmark willingly and/or reluctantly jumped on the bandwagon. Top management with prior experience at McKinsey Inc. and Goldman Sachs at the helm, provided succour for those that believed less in their own expertise and more in the aura surrounding alumni from giants of global capitalism.

By betting “On Management”, and NOT “On Science”, Valeant’s acquisition trail as outlined in Figure 1, was betting on either brute pricing power or some other force of nature to pay the bills when they come due. 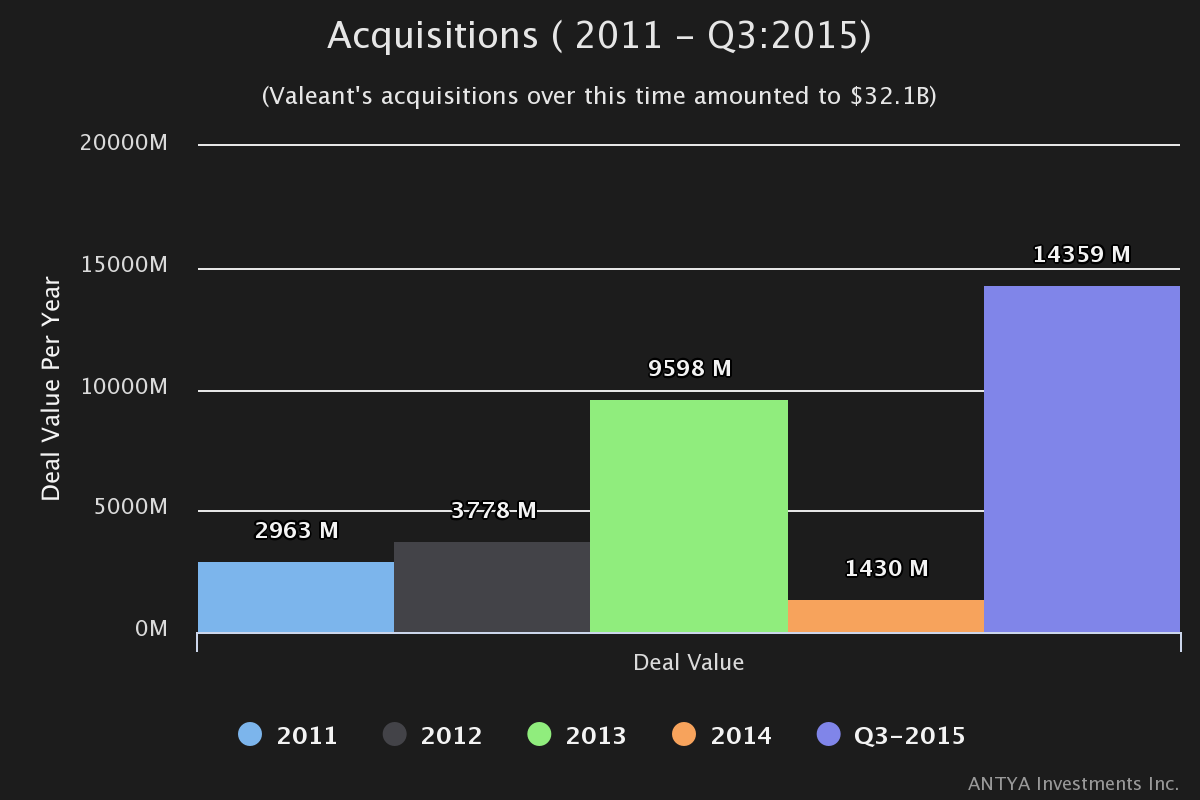 Valeant spent a total of $32.1 billion beginning 2011 to deliver on its agenda of betting on management, while highlighting that it was Driving Change1 and that its strategy of betting “On Management” was “Gathering Momentum”.

Figure 2: The Problem Starts Now – Debt Has To Be Repaid 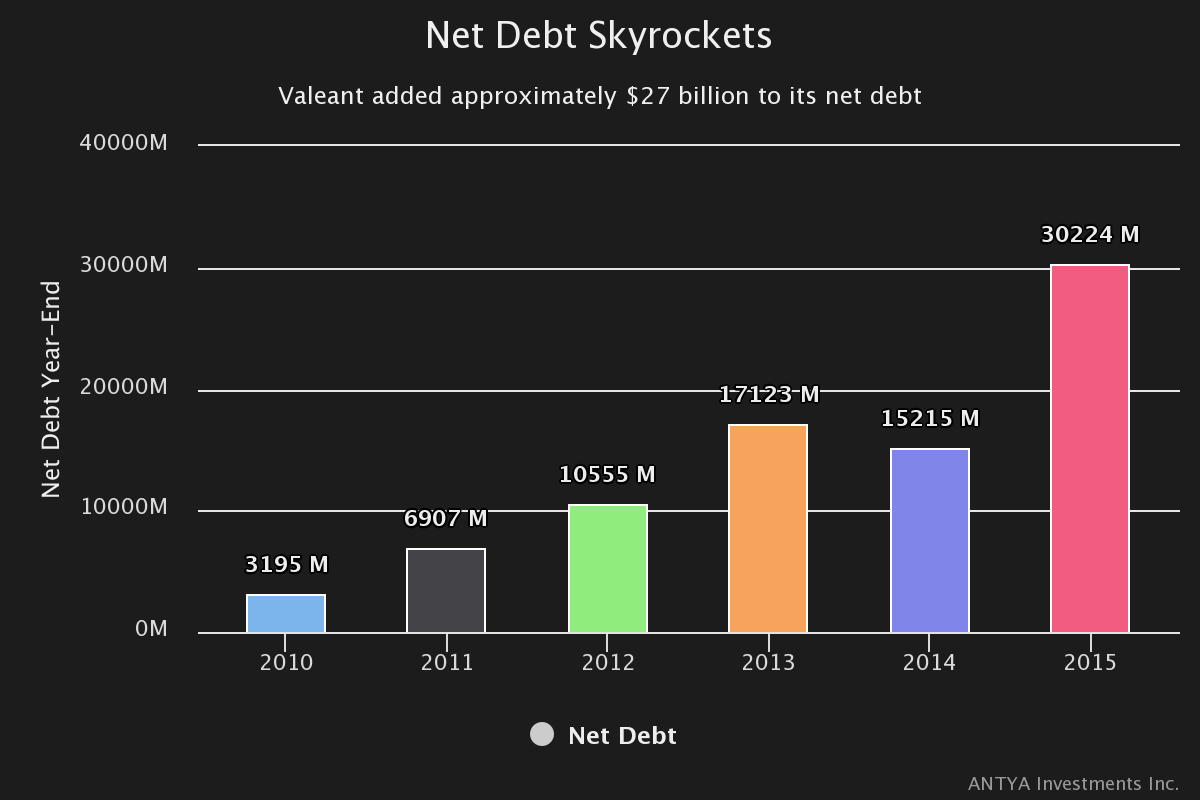 A benign macro environment of credit, blinded further by clichéd pronouncements from self-dealing intellectuals calling the company a “Platform of value creation2” whipped the equity and credit markets into a frenzy that has resulted in a precarious situation for all involved. Valeant is seeking an extension from its lenders with respect to the filling of its financial statements, so as not to breach debt covenants.

On the one hand the company bravely proclaims that it maintains a cash cushion, has enough liquidity and its businesses continue to perform well, on the other its CEO 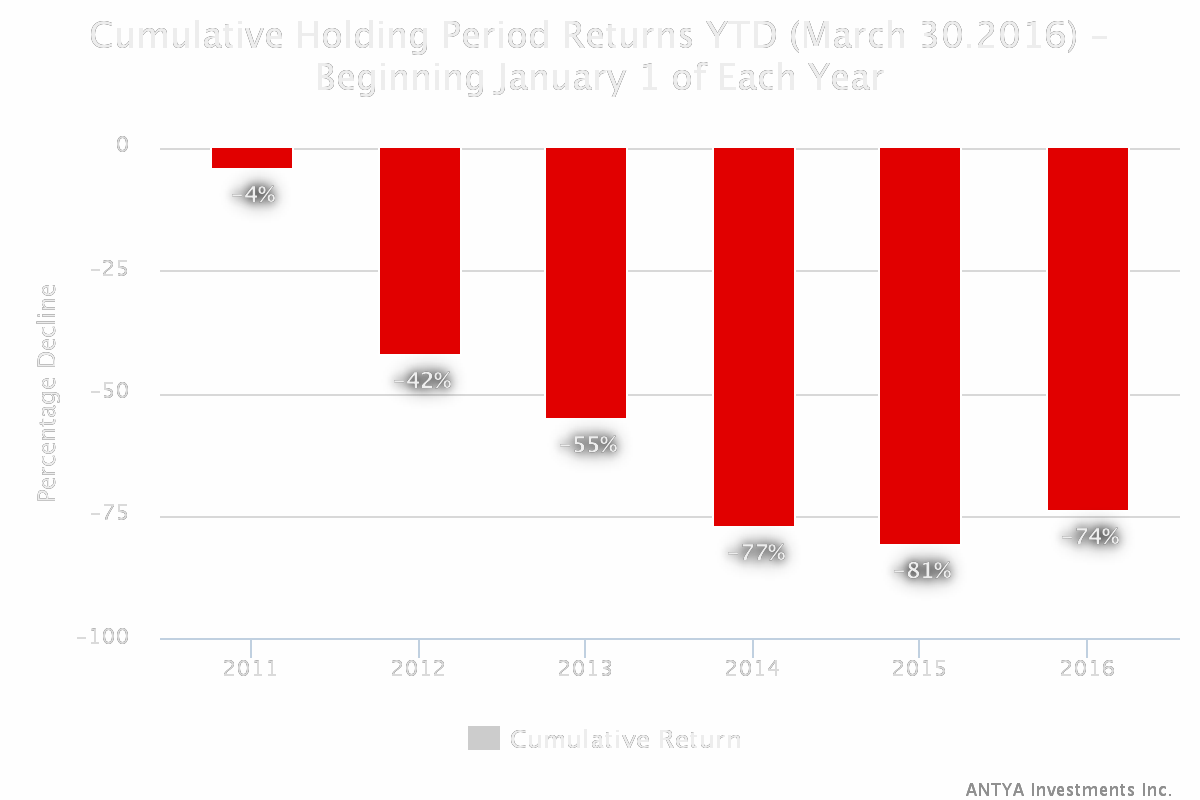 has been let go, the CFO is being asked to resign from the board, and there is a cease trade order directed at the top management of the Company.

Figure 3: Are you Valiant Enough to Wade In?

With Valeant making daily headlines for a number of years, it is but natural to evaluate it as an investment for a portfolio.  Incidentally, Figure 3 highlights that unless you have been one of those day traders sitting in front of a terminal with your fingers on the pulse of the market and/or Valeant, it has been a loser in your portfolio. For instance if you bought Valeant on January 01, 2014 and held on to it, as an investor your loss is 74% YTD (March 30, 2016). Similarly, if you had bought at the beginning of 2016 on January 1, after the stock had already lost 29% in 2015, you would still be down 74% in 2016, because the stock price has crashed to approximately $27 from $101 at the beginning of the year.

Valeant is unique in that it exhibits the holy troika of, a debt driven acquisition binge, the promise of a revolutionary business model which belies the realities of the industry it participates in, and accounting practices that are allegedly aggressive. With approximately $2.2 billion of free cash flow on $30 billion of debt, in a business that has already cut R&D to the bone, has lost pricing power due to regulatory scrutiny and political backlash, is subject to  vagaries of generic competition, and has an SEC investigation under way, Valeant could be at a tipping point in its evolution.

ANTYA’s clients entrust us with their savings under the assumption that the portfolio will deliver when clients need access to funds, and that we will manage risk-adjusted returns keeping in view client needs. Investing That Empowers You is undeliverable if we overlook the five key principles outlined above. Thus our investment philosophy, which has been honed over 15 years of fundamental research surrounding corporate governance, accounting and valuation is the primary driver of client portfolio returns.

ANTYA’s screening process never considered Valeant to be a worthy investment, and irrespective of its fan following it failed to impress us. We missed the thrill of the ride on its way up. However, we take comfort in the knowledge that we aren’t in Mr. Ackman’s camp either.  Today some consider Valeant to be a value play. I believe their valour is misplaced and things are likely to get worse with many reputations tarnished for good.

ANTYA clients can be rest assured that wherever the next Valeant is, it is not in their portfolio. More importantly, if something else has caught your fancy, based either on a self-conceived theory of a company’s business prospects or due to someone else’s recommendation, do engage us. Perhaps we will learn something new collectively.