It is our view, that come hell or high-water, in 2019, Tesla Motors (TSLA US) will establish itself as the pre-eminent large-cap growth stock. Those that are short would cover the position at a loss and those that are long are looking at another Apple Inc (AAPL US) or Amazon.com Inc (AMZN US) in the making. The ride may be volatile, but will be worth it.

Tesla Motors (TSLA US) (“Tesla” or the “Company”) was amongst the most reviled, the most shorted, and one of the most volatile stocks of 2018. Bearish investors, co-opted columnists, business television anchors that thrive on attention deficit disorder, both their own and that of the gullible viewership coalesced around a tale of an impending flame-out. We were told in no uncertain terms that the following was in store for Tesla imminently:

These are just the most vociferous and persistent prognostications that were made by anyone with a voice, a Twitter handle, a Facebook page, a blog, a tic-tac account, or anything else they could grasp to telegraph a rehashed opinion. That these stage actors were able to influence the behavior of Elon Musk — the CEO of Tesla – is the real story, because ultimately Musk made a strategic error in disclosing an unreal deal to privatize Tesla at $420/share. In our view, if that had come about, it would have been the steal of a century, but thankfully for us, and other investors it never did. Our contrarian stance on Tesla is well-established, and we believe 2019 will be a pivotal year for the Company, where the shorts throw in the towel and stock moves above $450-$500 by the end of the year. Some of the reasons for our thinking are outlined below.
First and foremost, as highlighted in Figure the shorts have no friends left. 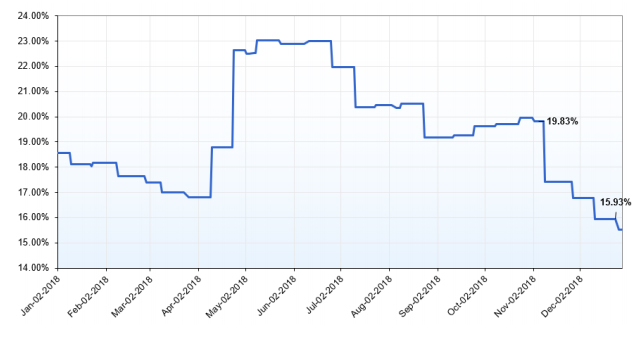 It is evident that a significant pile of those that were short have left with the market plunge in November and December 2018. Thankfully for the shorts, the markets handed them a golden opportunity to exit, and in the name of the lord that opportunity was grabbed with both hands. Short interest declined by approximately 5% towards the end of the year. In the final quarter of 2018, Tesla notched up multiple successes by ramping up Model 3 production, by paying down roughly $200 million of debt due in 2018, by agreeing to pay half the amounts due in early 2019 in cash and stock, by announcing an acceleration of the Gigafactory building in China, and finally, a lowering of auto-tariffs by China beginning January 01, 2019.

More importantly, Larry Allison has joined the board of Tesla Inc., and owns 3 million shares of the Company, as reported by Reuters in the following story, which is an enlightening read in itself Tesla names close Musk friend Larry Ellison to the board. The story from Reuters appears to reignite controversy surrounding Tesla’s board and its closeness with Musk. Nonetheless, investors are better off paying attention to Oracle Corp (ORCL US) and Allison’s famous and very public support of Steve Jobs at Apple Inc (AAPL US) Both should serve as a reminder to long-term investors, that if Allison’s track record is any indication, then Tesla is headed in the same direction as well. Moreover, with approximately 35% of the free float in the hands of insiders and committed long-term investors, any strength in equity markets in 2019, will put additional pressure on those that are short, to cover.

Furthermore, Uber Technologies (0084207D US) and Lyft Inc (0812823D US) are both clamoring for an IPO in 2019. Given that ultimately both these companies intend to become autonomous ride-hailing service providers, the valuation accorded to the duo will have a halo effect on the market’s perception of Tesla as well, because Tesla will be the only vertically-integrated fully autonomous ride-hailing company in the world. That implies that the option valuation of the autonomous ride-hailing business embedded within the duo would provide a base case for Tesla, with an additional premium for Tesla’s global fleet and its ability to be managed via a unified cloud-based platform.

What is the Risk?

In our view, the most significant risk to Tesla investors remains the trade skirmish with China. It could derail markets further, especially if President Trump feels the 2020 election campaigning needs to start in earnest, and his political rhetoric escalates the battle even more. We are not worried about competition from German, Japanese or American automakers. They are behind and are unlikely to catch up.