Tesla Motors (TSLA US) continues to power ahead of the competition in electric vehicles with an 80% market share of all electric vehicles sold in the United States in 2018. With approximately 140,000 Model 3 cars sold in the U.S., Tesla outsold every marquee sedan brand. Model 3 outsold mid-size SUVs including
BMW X3, Acura MDX, Audi Qs, Lexus RX and even the Mercedes C-Class.

To the extent Q4-18 results from Tesla Motors (TSLA US) (“Tesla” or the “Company”) were expected to strengthen the hands of naysayers and bearish investors, the results were disappointing. Others that believe in Musk’s mission of getting rid of fossil fuels and freeing up valuable time from the chore of driving have reasons to cheer. Point being that the tug of war between bearish and bullish investors will continue in 2019, just as it did in 2018.

There was much to like in today’s disclosures, and it appears to us that irrespective of all the negative news surrounding the Company, Tesla is executing on its business plan and will have higher margins and free cash flow, compared to conventional automakers as it moves forward. While bearish investors continue to view Tesla through the lens of a conventional automaker, in ANTYA’s view, Tesla is anything but!

As per the disclosures today:

Tesla will be free cash flow positive after capital expenditures of US$2.5 billion.

Tesla will pay down the convertible debt that has been the “go to point man” of bearish investors.

Tesla will fund the Shanghai Gigafactory through local currency debt.

That means Tesla will not issue equity and dilute current investors.

Could Tesla’s bonds be undervalued relative to the risk?

We have argued previously that bond investors in Tesla appear to be chilling out, compared to the volatility that equity investors appear to be suffering by investing in Tesla. We discussed our view on Tesla bonds in Tesla Inc. – The Debt Default Narrative – Why Are Bond Investors Sanguine?

To that end, we highlight Figure 1, which seems to us to suggest that there is an opportunity in both Tesla’s equity and in Tesla’s bonds. 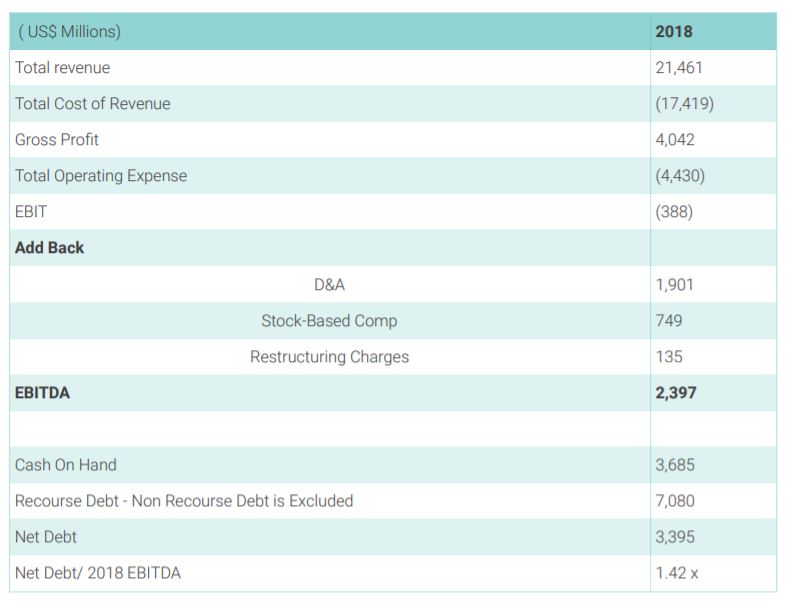 From our vantage point, once you look beyond the unnecessarily glorified debt-default narrative, Tesla’s net-debt/EBITDA number looks highly respectable. The numbers in Figure 1 are sourced from Tesla’s cash flow, income statement and balance sheet released today. Given that our readers are sophisticated, we wouldn’t venture to explain the process of arriving at the net-debt / 2018 EBITDA multiple of 1.42 x

In our experience, based on that metric, Tesla possesses an investment grade balance sheet, although no rating agency would agree with our view. Rating agencies by their very nature have a retrospective view, whereas equity investors need to be prospective.

To conclude, slowly but surely, Tesla is gaining industrial strength with world leading and world-beating technology. None of its avowed competitors come even close in performance, price or their ability to deliver high volume production of BEV’s. By the time real competition arrives in the 2020-2021 timeframe, Tesla with its Semi, Model Y, Model X, Model S, Model 3 and The Roadster would be so far ahead of the competition that they would be just a blurt in its rearview mirror. We maintain our bullish view.

As usual, we ignore bearish viewpoints -— at our peril — because, beyond negative free cash flows, low margins and high debt, we have not heard anything innovative or critically interesting yet. We remain open to hearing data-driven and fact-based bearish outlines, other than those based on a DCF.