A dismal 2018 for the pharmaceutical and bio-tech stocks seems far in the rear view mirror. 2019 began with a bang with two blockbuster deals in the pharmaceutical space within days. In this note, we discuss Bristol Myers Squibb’s Co (BMY US) acquisition of Celgene Corp (CELG US) and outline our view that investors should go long BMY.

Happy New Year to all our readers. We took a break from writing in December and early January to recharge and are now back in earnest. There is a lot to write about and opine on, especially given that our inaugural year on the platform in 2018 proved especially fertile and on the mark. We intend to maintain our momentum and continue to assist those that subscribe to our research in generating impregnable alpha.

The new year began with a bang with Bristol Myers Squibb Co (BMY US) (“BMY”) announcing the acquisition of Celgene Corp (CELG US) (“CELG”) on January 03, 2019, for an estimated US$ 88.4 billion, excluding the value of US$ 6.3 billion in additional contingent value rights (“CVR”) granted to CELG shareholders. Figure 1 highlights the numbers for those that would like to keep score and follow our thinking in some more depth.

Figure 1: The Numbers Behind the Proposed Deal 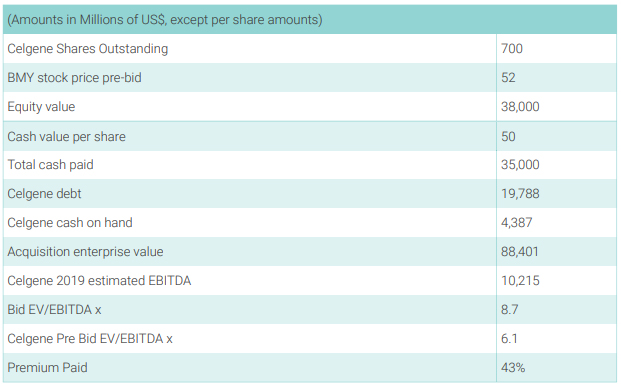 Some aspects of the proposed transaction have been covered by John DeMasi, and hence our readers may want to indulge John as well if they haven’t already. It is also pertinent to note that our emphasis is on Enterprise Value whereas media reports have homed in on equity consideration paid by BMY including the data disclosed by BMY because, in our view, that makes the premium paid to equity holders of CELG appear much higher. As BMY said in its release and we quote;

On that basis, CELG shareholders garnered a premium of 54%, excluding the CVR, whereas on an EV/ EBITDA basis, as estimated by ANTYA and highlighted in Figure 1, CELG shareholders earned a premium of 43%. While 43% is nothing to be sneezed at, especially given that that equity investors ascribed zero value to CELG’s pipeline given the patent issues facing its existing Revlimid franchise, it is lower than what we would expect. That brings us to the question, could it be a good deal for BMY?

In our view, to consider it a good deal for BMY, one does not have to climb a wall of worry, based on the robust free cash flow generation and rapid de-leveraging inherent in the deal, the expectation of attaining US$ 2.5 billion in synergies and creating the leading immune-oncology and hematology franchise globally. Without getting too much into the science, and by just focussing on the numbers, we can see that there is significant potential for investors here. We emphasize the current 2020 consensus forecasts for each of BMY and CELG and then apply some of the assumptions outlined by the acquiring management team on the combined company to outline the financial possibilities inherent in this deal.

Figure 2 – A Pro-Forma Look at the Financial Prospects 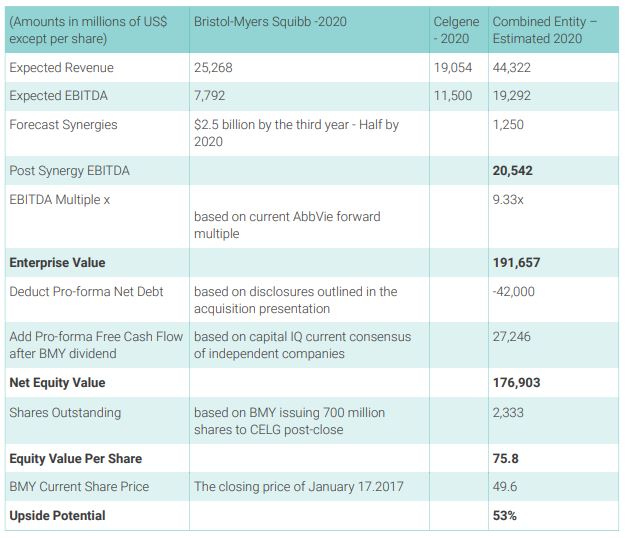 Undoubtedly, the numbers outlined in Figure 2 are subject to inherent uncertainties associated with the pharmaceuticals business, and the likely possibility that the drug pipeline will be less successful than envisioned. That was evident in CELG’s equity valuation before the bid by BMY. In CELG’s instance, market participants refused to give the company any credit for its intellectual property beyond Revlimid.

Turning our attention to Figure 2, and focussing on 2020 for the moment, the combined entity column represents the addition of the standalone consensus estimates for CELG and BMY on a proforma basis for revenue and EBITDA. Management estimates that the merged entity will generate US$2.5

billion in synergies by the 3rd year post-closure, slated for the second half of 2019. We use half of that estimate, i.e. US$1.25 billion for 2020, and add it to the proforma pre-synergy consensus estimate of US$ 19.2 billion to arrive at ANTYA’s estimated EBITDA of US$20.5 billion for 2020.

What multiple should an investor ascribe to a business, where many considered CELG to be a broken business model, especially given R&D setbacks in 2018. BMY is also facing a battle against Merck’s Keytruda in cancer therapies. The answer to that conundrum lies perhaps in looking at Abbvie Inc (ABBV US). ABBV’s management and investors are wrestling with the same challenge, that CELG and BMY are trying to solve by combining. Like CELG-BMY’s, Revlimid, and Opdivo, ABBV’s blockbuster

Humira has taken the medical world by storm and is the backbone of its US$ 161.1 billion EV. That EV currently provides an EV/EBITDA multiple of 9.33x 2020 estimated ABBV EBITDA of US$ 16.6 billion. Investors, however, are wondering what’s next from ABBV?

Assuming that the business risk profile of ABBV is similar to that of the post-merger BMY-CELG, in our view applying ABBV’s 2020 EBITDA multiple is the appropriate benchmark. On that basis, we arrive at an EV of US$191.6 billion for the BMY-CELG. The combined entity is expected to have net debt of $42 billion at the close of the transaction, and we expect it to generate US$ 27.2 billion in free cash flow after BMY dividends for 2019-2020. Therefore, at the end of 2020, we expect BMY-CELG to have an equity value of US$176.9 billion.

In the interim BMY will issue 700 million shares to CELG shareholders, resulting in total shares outstanding of 2.33 billion by the end of 2020. In our estimate, that provides an equity value of US$75.8 per share of BMY-CELG, compared to a current trading price of US$ 49.6 for BMY.

A couple of other issues to be considered are:

CELG was a high-flying stock that got the wind knocked out after R&D setbacks in 2018. Could something similar befall BMY-CELG? Yes, it can. However, given the depth and breadth of the R&D franchise, the heft of cash flows, and a global footprint, BMY-CELG is on a much stronger footing than either company on its own.

Moreover, it is unlikely that a suitor for CELG emerges at a higher price, whereas rumors of suitors for BMY abound. We are therefore making a long bet on BMY. We expect BMY to generate a compounded return of 20% over the next three years.